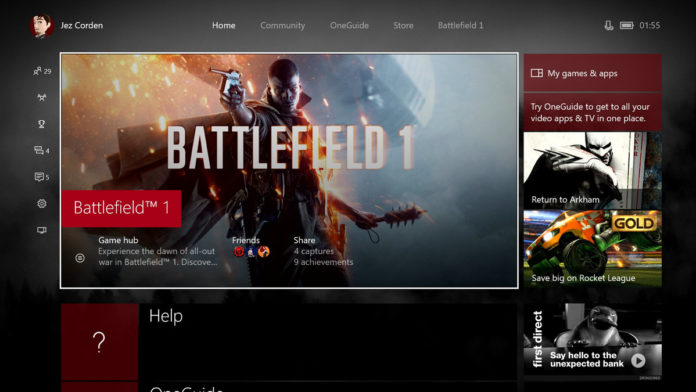 Back at E3 2016 event Microsoft demonstrated 3 big new features Xbox Clubs, Looking for Group and Arena for the Xbox One. Couple of months ago they already rolled out these feature to the Xbox One preview users and now they are polishing these features before public launch.

Meanwhile the latest Xbox One preview build bring so much improvements to the main dashboard. The latest Xbox One Preview build 14393.2100 is available for the insiders. This update adds a ton of new information to the main tile. It adds a menu button prompt on the left, giving quick access to the selected title’s Gamehub and description, as well as icons of friends currently active.

When you hit the start button, a brand new context menu appears. Developers will able to tap into this feature, and it could work similarly to Windows 10’s jump lists. In addition user can pin gametile to the home. We will soon see UWP applications live tile in future update.

Maybe it’s just the tip of the iceberg. We will see more future Xbox plans at this week’s Microsoft event in New York. Till that stay tune for more update.