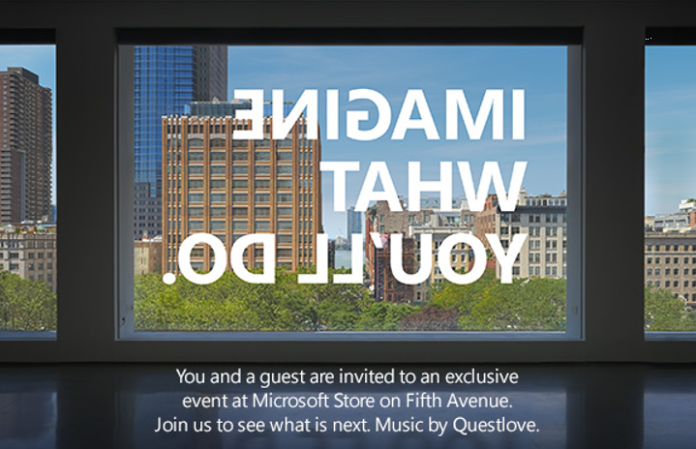 Since we are not expecting a new surface device this year, but we do expect Kaby Lake in Surface devices. Kaby Lake is the codename for Intel’s 7th generation Core i3, i5 and i7 processors, which bring reduced heat, a double-digit bump in integer performance, improved Speed Shift technolog.

In quick not, I am not expecting both of them. As we know that the Microsoft already stopped the Lumia production. But that doesn’t mean that Windows 10 Mobile is dead. Lumia is hardware. They continue to develop the OS (Windows 10 Mobile). And maybe we will see something new at the event. Maybe company want to re-brand Lumia? Just like Google released their own smartphone. Anything could be possible.

Here’s all about new thing. Back June this year we had seen some reports that Microsoft registered pattern of so called Surface All-in-One hardware. The Surface All-in-One could likely have a detachable display, inking support, and be modular in nature with add-on components. It will have 4K resolution and would have 3 variants (21 – 24 and 27 inches also).

Personal Thought : Surface All-in-One could be the new TV, just like we have Android TV, Apple TV similarly Windows 10 TV. ;). It is possible yes, You can check the registered pattern by Microsoft.

Company is ready to jump in the smart home appliance with Cortana. Since Cortana became more powerful and productive. Basically the HomeHub will be the device like the Amazon Echo which might be powered by Cortana instead of Amazon’s Alexa. But the question is will it really beat the Amazon Echo and Google Home? Will it be the true rival?

Since Microsoft already removed the Band 2 from the Windows Store, so there is no possibility to see Band 3 on this event.

The Project Centennial serves as a bridging tool between Win32 apps and Universal Windows Apps. With this converter developer can run a test on their Win32 app, plug in the additional UWP features and functions, and also can push their app to the Windows Store. Hopefully Microsoft will demonstrate new tools and improvements in this project.

So, that’s all! What are you expecting from this Microsoft October Event? Let us know in a comment below.

You can watch the live stream of event here and stay tune to #MicrosoftEvent for more update.