Microsoft was supposed to release another Mid Range Smartphone Lumia 750 along with phones like Lumia 650XL and Lumia 850.

However the Smartphones Lumia 650XL and Lumia 850 were cancelled along with Lumia 750. There were rumours that the company might be launching the Lumia 750 by mid 2015 or first half of 2016, but which later never happened.

Now there are leaked images which are available on one of the China Websites showing the Lumia 750 Aka Guilin. 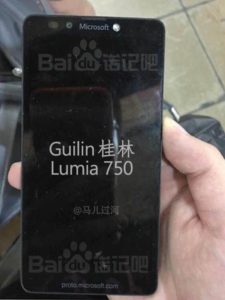 Here are the full specifications of the device:

In case you want, you can have a look at the rumored Lumia 750 specifications.