With the next version of OS namely Redstone 2 Microsoft seems to be testing a new option Night Mode namely “Blue Light”.

This feature is currently not active but should be available to all publicly in Windows 10 once a new build is rolled out. The Night Mode option works with some cool colors which does not have a negative effect on your eyes while using the phone during night times especially for people who work on Computers and Mobile during Night time.

This feature was revealed by well know leaker Core via its Twitter account, which confirmed the availability of the Blue Light feature in Quick Action Centre in testing internally but currently disabled 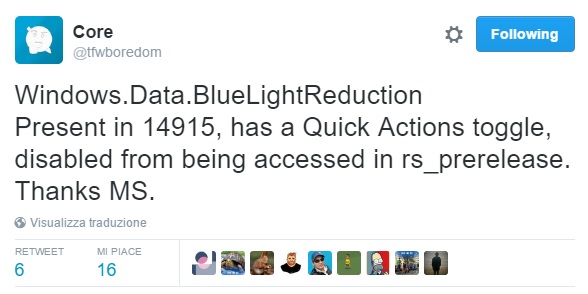 Currently there is no official confirmation from the Company when will the Night Mode (blue Light) feature will be available to all users on Fast Ring Redstone 2.