The people who have the Microsoft Facebook app installed on their devices will be getting the below message when trying to access the same. 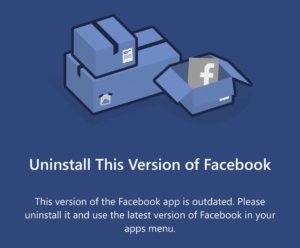 The app is not yet crispy to load and crashes quite often especially on devices with Lower RAM. Since this is an IOS Ported App does not quite work smoothly on Windows 10 Mobile. Hopefully the company is trying to fix the crashing issues with the app and make it more crispy and usable for Windows 10 users.

Download the app by clicking on the link if you haven’t yet downloaded the official App.