After a slight delay from the update for Windows 10, Windows 10 Mobile is also now receiving Cumulative Update 10586.545 . The update, like most other cumulative updates, doesn’t bring any new features and is all about improvements to the OS.

A specific changelog isn’t provided for Windows 10 Mobile at the moment but it is expected to be mostly the same as Windows 10’s PC version. 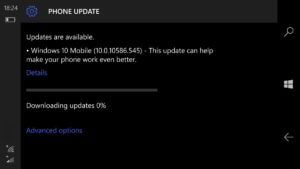