A Windows Store listing for WeChat’s new Universal app has been spotted. The app is available for download from the Store for some and doesn’t seem to be fully functional. Also, the app crashes when you try to scan the QR code to connect the app with your phone, suggesting that the app is nowhere near to an official release at the moment.

It isn’t clear fully clear what the app does include as the Windows Store includes just one screenshot of the app which shows that the app will let users send files, photos, and emojis. From the screenshot, the app seems pretty basic which is probably due to it being in very early stages of development or just being from an older version. 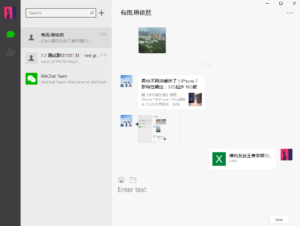 Although some people have reported it to be available to download for them, it isn’t available for us. Try downloading it from here.

Are you waiting for WeChat’s new Universal App? Have you had any luck downloading this test version from the Store? Let us know via the Comments section.