Micorosoft yesterday released a New build for Redstone version 14385 for both WIndows 10 PC and Windows 10 Mobile.

Now there has been a new build sighted 14387 for Windows 10 PC and Mobile compiled on 08th July .Microsoft could be considering this to be the RTM build which could release to Windows Insiders next week. 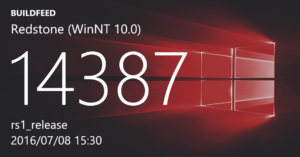 If everything goes well then we could see the given build released to public as Anniversary Update on Aug 2nd.

But since there has been no official confirmation from Microsoft themselves take this news with a pinch of salt.

SO what do you think about the leaked build version, will 14387 be the build which would be released to the public on Aug 2nd let us know in the comments section below.