This time the Build version has gone up to 10586.494 and has been compiled on 30th June 2016. Currently we have no news as to what would be Fixed and improved or Added to the build. 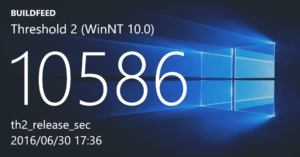 This will be another Cumulative Update to be released to the Stable Branch by the company if all testing goes well with no bugs detected.

The company is trying to remove all the glitches with the OS by improving the performance of the OS before the Anniversary Update Mobile is released to the public.

Note: Currently its not confirmed whether this would be the build which would be released to the general public since the company has compiled 4 builds in a span of 4 days. (10586.491,492,493)