Some guys over the power consumption lab at Microsoft have been working on proving how the new built-in browser Edge can last more on battery while web browsing.

In the video above you can see 4 identical laptops streaming one video throught 4 browsers: Edge, Chrome, Firefox and Opera (also known as the most used web browsers).

After they unplugged the power, this is what happend. 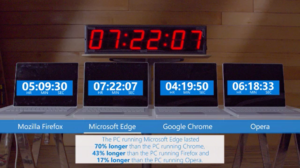 You can clearly see that the one running Google Chrome was the first one that stopped.

As Microsoft director Jason Weber said in the related blog post, “We’ve been focused on power management since beginning of the Edge project. It was part of the original objective of the browser and our multi-device strategy. It’s something we measure every day, and at every code change, in our power and performance lab.”.

And after a year of testing, here’s the result. 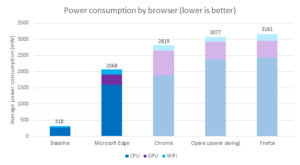 For these browsing activities, tests show Microsoft Edge is a more energy efficient browser on Windows 10, with up to 36%-53% more battery life to get what you need done. 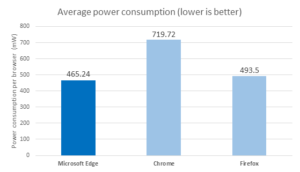 And then there’s the real world. In addition to testing battery life internally, Microsoft also looks at tens of millions of PCs that send telemetry data to the firm, Weber said. And what it sees there is simple: A small advantage over Firefox, but massive gains of about 50 percent additional battery life when compared to Chrome.

Microsoft Edge is finally catching up to the functionality gap with rival browsers in the Windows 10 Anniversary update, thanks to the addition of extension support, this new report means that the hard work I’ve been seeing on Edge, I think it’s clearly time for Windows 10 users to take another look on this browsers.