Those who are interested in hacking your phone to get the new Windows 10 Mobile redstone build, you can contact me for installation guide by mailing me on [email protected] 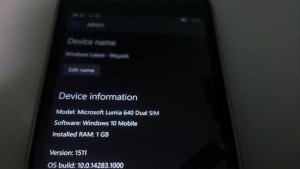 Like the first time, we faced lots of trouble when installing the Windows Redstone on the Lumia 640. However, this time, it was very smooth experience as we no longer need to repeat the same hack to get the new build installed. It seems Windows 10 Mobile Build 14267 included a bug in which the connection to Windows Update was very weak and downloading took a lot of time. At a certain percentage of download, it stopped using WiFi network. However, a soft reset fixed the problem and we were finally able to install the build.

Preparing to install process took less then 10-20 minutes. On other hand spinning gears took around 15 mins and 5-10 minutes on the migration process. So, the total installation process was around 45 minutes which is not that bad keeping in mind its a Windows Redstone Build. After the update, the apps which are installed in SD card took 20 minutes to come in a working stage. 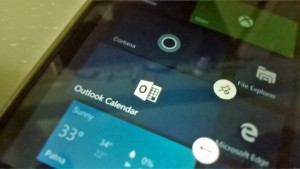 Windows 10 Mobile Build 14283 also includes a new live tile resizing animation which looks pretty cool. For those who are wondering, when we resize a live tile in the start screen it shows a new fading animation. We will demo the new animation feature in our video review, which is scheduled to publish later today. On other hand, some of the major bugs are not still fixed in this build, as reported earlier this month that Windows 10 Mobile Build 14267 is having a major freezing bug on a Lumia 640 and the issue is still happening on our device. However, the Wifi connecting bug has been fixed in Windows 10 Mobile build 14283.

Windows 10 Mobile Build 14283 comes with new improvements which are pretty exciting. You can read them below:

Improvements to the Phone app: We know how important it is to stay informed when someone is trying to reach you, whether that’s through notifications, Live tiles on your Start screen, or directly within your communications applications. To help with this, we’ve added missed call and voicemail waiting indicators to the tabs inside the Phone app. Once you navigate to a tab with a missed call or voicemail – the indicator goes away. We’ve got another change coming that will keep the indicator in place until you navigate away from the tab. There is also a bug where you might not see the indicator clear right away – a fix is coming soon for this as well. Let us know what you think!

Updates to Outlook Mail & Calendar: Yesterday, we released an update to the Outlook Mail & Calendar apps that introduces some new features and improvements. In Outlook Mail, you can turn off the message preview text in the message list (Settings > Reading > Conversation and turning “Show preview text” off). You can also quickly get rid of junk email in your inbox by pressing down on a message to bring up the context menu and choosing ‘Move to Junk’. In Outlook Calendar, you can now let others know “I’ll be late” directly from meeting notifications. 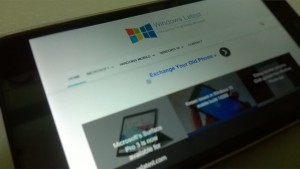 We have noted down some of the most downloaded apps performance below:

Like the previous build, Windows 10 Mobile Build 14283 comes with lots fixes which Windows Insiders were waiting for a long time.