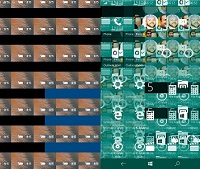 Windows 10 Mobile build 10586.71 has been released for Windows Insiders on Fast ring and followed by slow ring later. However the build does comes with number of fixes but it have it’s own unique issues which are affecting user experience.

Recently, Windows 10 Mobile have a issue which causes start screen/Microsoft Edge browser to get corrupt and become mess. Most of us think it’s a hardware (display) issue, however the issue of start screen was fixed in earlier builds but it seems the bug has made a come back in Windows 10 Mobile build 10586.71.

Today we found an very easy, but a temporary fix of this bug. The solution will also work on Start Screen & Microsoft Edge Browser issues. Follow below steps to fix:

However, you might notice the problem repeats again and again, but you can fix the issue by following above temporary solution. It is worth to note the solution works on all mobile builds and devices. If you are still facing the issue do let us know in comments below and please spread the article by sharing as much as you.

Thanks for Image: Sumit & Gus