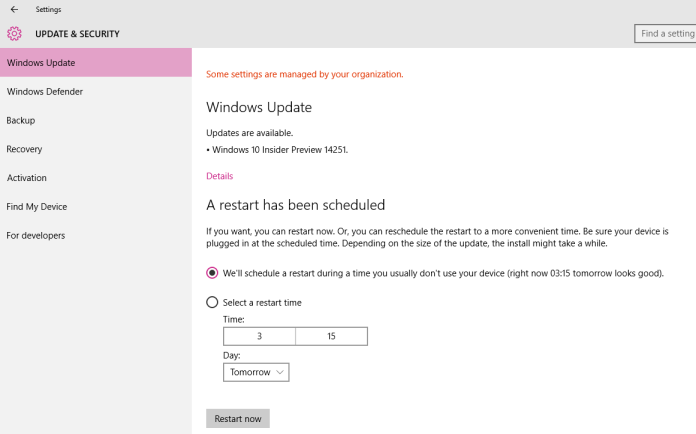 A new Windows 10 update for Insiders is rolling out only seven days after the release of the previous one. Windows 10 Build 14257 is available for testers enrolled in the Fast Ring, but depending on feedback and community chatter, the slow ring channel could get it soon.

Windows 10 Redstone Preview Build 14257 includes fixes for the previously discovered issues. Microsoft is very knee on refining the overall performance and experience of the operating system, so no new features or UI changes are included in the latest Windows 10 updates.

Gabriel Aul, the head of the Windows Insider program, noted on Twitter that Windows 10 won’t receive any new features in the initial builds of the Redstone. Microsoft is only beginning the development of the next feature update. Any changes in the update are mostly foundation work for the upcoming changes.

As mentioned above, this build has been released only seven days after the previous one. Microsoft also revealed that the increased pace of the Fast ring means the new Windows 10 Redstone builds won’t come with too many big changes.

Microsoft’s Windows engineering team doesn’t have enough time to include significant new features as they also have to lay the foundation for future work and fix bugs at the same time.

Build 14257 comes with a long of fixes and improvements. For instance, Microsoft has fixed an issue that resulted in frequent app crashes and memory-related app errors. In the changelog, Microsoft notes that incorrect memory management change caused the aforementioned problem.

After today’s update, you can now launch the Git client for Windows without any errors or crashes.

The update brings back Connect quick action button to the Action Center. Microsoft Edge has been also updated with fixes for the F12 Developer Tools.

A bug has been fixed where Windows 10 displayed the suggested apps on the Start menu when “Occasionally show suggestions in Start” was turned off.

Another bug has been addressed where users couldn’t paste files into a compressed folder in File Explorer.

Windows 10 Redstone update doesn’t yet have an official name, but it is expected to be finalized later this year ahead of its public launch.